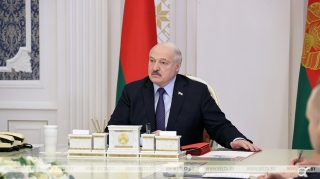 Serious financial and organizational investments in the development of Gomel Oblast, Mogilev Oblast, and Vitebsk Oblast seem necessary. Belarus President Aleksandr Lukashenko made the relevant statement as he authorized the appointment of new heads of district administrations and deputy heads of oblast administrations on 13 May, BelTA has learned.

Aleksandr Lukashenko said: “Gomel Oblast, Mogilev Oblast, and Vitebsk Oblast are the three oblasts we should seriously invest in. Not only financially but primarily organizationally. Discipline above all.”

He noted that deputy heads of the oblast administrations are not novices and should oversee the realization of concepts and programs in this or that area. “There is a huge amount of work that needs doing in Vitebsk Oblast,” Aleksandr Lukashenko said.

Although Vyacheslav Durnov was appointed Deputy Chairman of the Vitebsk Oblast Executive Committee and will oversee social affairs, the head of state formulated a common task for the entire regional administration: “The most important exam for you today is the integration structures [in agribusiness] that we've created. You will be held accountable for them.”

“There is plenty of work that needs doing in Mogilev Oblast. It is good that [Chairman of the Mogilev Oblast Executive Committee Anatoly] Isachenko has risked returning there,” Aleksandr Lukashenko continued.

BelTA reported earlier that the president has authorized the appointment of Gennady Dengalev as a deputy chairman of the Mogilev Oblast Executive Committee (in charge of civil engineering and utilities industry).

Aleksandr Lukashenko stressed: “Well, our situation is not simple considering so-called sanctions and the rest. People's moods. Yes, many have come to their senses after 2020. You can see it as well as I do. But it is necessary to understand that there are plenty of people, who not only think differently (thinking is not forbidden after all) but who wait for an opportune moment. You have to see these people. Mobilize law enforcement agencies around you. They should act in the designated direction. Primarily the direction that the executive committee creates on the spot.”