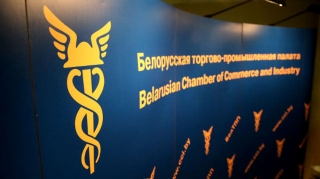 The event was attended by BelCCI Chairman Mikhail Myatlikov, Deputy Chairman of the Mogilev Oblast Executive Committee Ruslan Strakhar, Deputy Director of the Department of Foreign Economic Activity - Head of the Department for Coordination of Foreign Economic Activity at the Ministry of Foreign Affairs Yaroslav Mitskevich and more than 120 representatives of еру enterprises - members of the BelCCI.

Ruslan Strakhar lauded the role of the BelCCI and its regional branch in establishing and developing international and interregional economic ties, increasing the export potential of the region. He also suggested that the Chamber develop new forms of interaction with business and assistance with accessing new markets. He also reaffirmed the commitment of the Mogilev regional administration to support enterprises in finding partners abroad.

BelCCI Chairman Mikhail Myatlikov summed up the results of work across the key areas for three years, noting that in this difficult period for business, the BelCCI actively sought new methods and formats of work, expanded and modernized services to support member enterprises and to promote Belarusian exports.

Addressing the participants of the meeting, representative of the Ministry of Foreign Affairs Yaroslav Mitskevich emphasized the active role of the BelCCI in assisting Belarusian enterprises to tap into new sales markets and establish partnerships with foreign companies.

The participants of the meeting heard out the report of Gennady Cherny, Director General of the Mogilev branch of the Belarusian Chamber of Commerce and Industry, on the work of the enterprise in 2019-2022. He praised the work of the branch, the activities of which over the past three years were aimed at providing maximum support to businesses in overcoming difficulties and increasing the export potential of the region. The director general assured that this priority would remain in place in the future activities of the branch.

The voting resulted in the election of 14 delegates to represent the business of Mogilev Oblast at the congress. The meeting also featured a ceremony to award Mogilev Oblast enterprises - winners of the national contest Best Exporter 2021 and present certificates to new members of the BelCCI in the region.

The next congress of the Belarusian Chamber of Commerce and Industry will take place on 5 October 2022. The event is set to review the results of the BelCCI activities over the last three years and determine the areas of future work.