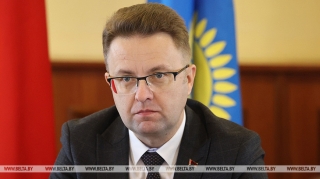 Opinion: Interregional cooperation is an efficient tool to establish ties between CIS countries

Interregional and cross-border cooperation is an efficient tool for establishing ties between the CIS countries, Mogilev Oblast Vice Governor and Chairman of the CIS Council for Interregional and Cross-Border Cooperation Ruslan Strakhar, BelTA has learned.

Mogilev is hosting the 11th session of the CIS Council for Interregional and Cross-Border Cooperation. “This is a very important event for the Republic of Belarus and Mogilev. This year our country is the head of the Council for Interregional and Cross-Border Cooperation. Today we have once again discussed what we have achieved in this difficult post-pandemic period. Everybody agree that interregional cooperation is an important and efficient tool for the establishment of relations between our countries, for the establishment of cooperation in various fields. It is important to look at the areas where we can be useful to each other,” he said.

Attending the Mogilev event are representatives of the CIS Executive Committee and a delegation from Uzbekistan. A number of countries have joined the meeting via video conference.

According to the Mogilev Oblast vice governor, interregional relations are an element that can bring together the interests of two different states at the regional level during the current difficult period. “It is faster to identify specific areas of cooperation. There are many of such areas. For example, an increase in mutual trade, which is also very important. CIS countries have been showing good figures in mutual trade this year. Another important point is cooperation, import-substituting projects which are implemented in each country. By exchanging experience, we can quickly establish cooperation in this direction,” he said.

The agenda included nine issues which were related to the implementation of decisions of previous meetings, the state of interregional and cross-border cooperation in the CIS member states, the activity of chambers of commerce and industry in the development of cooperation between the regions and border areas, the development of information and library space on the basis of border libraries. Participants also discussed a concept for the organization of the CIS Regions Forum.

One of the participants of the meeting in Mogilev was Timur Mansurov, Head of the Scientific and Technical Cooperation and Innovations Division of the Economic Cooperation Department of the CIS Executive Committee. In his words, a number of issues of a practical nature were put on the agenda of the meeting. “Plans are in place to discuss the concept of the CIS regional forum. It has been developed on the initiative of Uzbekistan. It is expected that this concept will make a practical contribution to the further organization of such forums. Basically all such forums have been previously held on a bilateral basis. Uzbekistan suggests holding such forums within the CIS format. This will bring closer interaction both on regional and interregional levels. The organization of such forums in the regions will demonstrate how the regions of CIS countries are developing and will help cement the foundation for a greater trade and collaboration on humanitarian issues,” he stressed.

At the end of the meeting of the CIS Council for Interregional and Cross-Border Cooperation it was announced that Kazakhstan would chair the Council next year, The 12th meeting will take place in H2 2023.