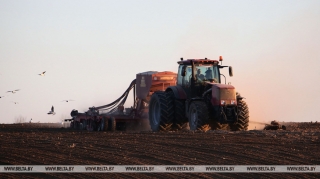 The president emphasized that the government took all the necessary measures to address such pressing issues as financing, fuel supply, preparation of equipment for planting. “Everything that needed to be done by the central government has already been done. All that remains is to fulfill the tasks on the ground. Yet, I get information that some regions are under-performing,” Aleksandr Lukashenko noted.

First of all, the president pointed to the issues with machinery, in particular, the low rate of preparation of energy-efficient tractors - about 80% in Vitebsk Oblast. “What is the problem? When will the repair of this equipment be completed? This pertains not only to tractors, but also to combine harvesters, grain drying complexes,” the head of state said. He urged to get the machinery ready beforehand, since there will be no time to do it during agricultural works.

“The equipment must be in perfect order,” the president said once again. He recalled his instruction for machinery producers like Gomselmash, MTZ, MAZ and others to help agricultural producers repair energy-efficient equipment and prepare it for planting works. The president was told that this instruction had been fulfilled.

Talking about important tasks for the near term, Aleksandr Lukashenko said that agricultural companies should have the sufficient number of machine operators.

“The second problem is the slow pace of procurement of mineral fertilizers. This is your responsibility,” the head of state said addressing Prime Minister Roman Golovchenko. “Make sure that agricultural companies receive the necessary fertilizers,” the president added. The state of affairs in Vitebsk Oblast, Mogilev Oblast and Gomel Oblast cause the greatest concern.

The president noted that Belarus produces potash, nitrogen, phosphorus and other fertilizers in sufficient quantities to meet the needs of the domestic agricultural complex. There should be enough of them on the ground.

“Our seeds are ready, we have been working on it throughout the winter,” he continued. That small amount of seeds of some crops that are not produced in Belarus will be supplied by Russia. “According to the plan, Russia will provide us with all the seeds. Russia is also interested in this. And these are small volumes,” the Belarusian leader said.

As for fuel, domestic enterprises have enough fuel to meet their needs. The president added: “We must use the fuel that we have.”